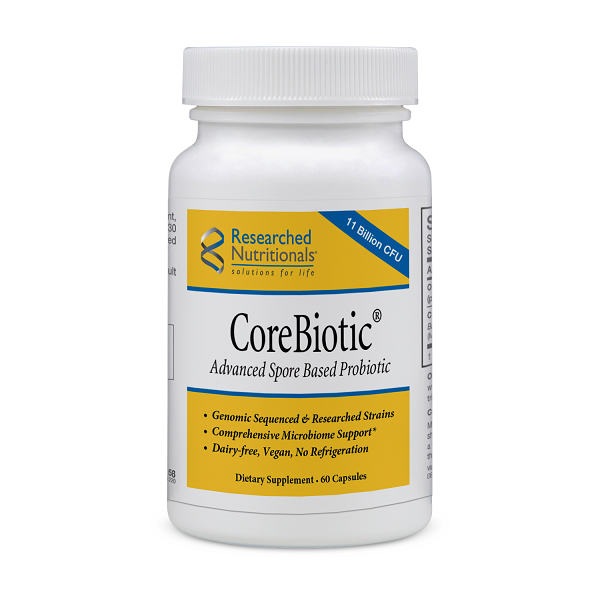 By Researched Nutritionals
In Stock
RN158
In stock
Share
Details

CoreBiotic® combines three fully sequenced and registered spore-based probiotics along with VitaFiber® prebiotic to support a healthy microbiome. Each strain was specifically chosen for its mechanisms of action, backed by supporting research.

Spore-based probiotics are derived from the soil and are sometimes referred to as soil-based organisms, or SBO’s. Traditionally when people consumed minimally processed products from the ground, they inadvertently ingested these soil-based probiotics.  These SBO’s were crucial for maintaining a normal gut microbiome. Due to modern farming techniques, including over-processing and the use of pesticides and herbicides, people do not naturally consume these beneficial SBO bacteria as they traditionally have.

Spore forming strains have several advantages over their live strain counterparts. Most notably, their ability to form a protective spore.  This spore allows them to withstand much harsher environments such as those present in the stomach, allowing them to reach the intestines where their benefits can be fully realized. This also means they do not require refrigeration. Double-blind, randomized, placebo-controlled trials have established the safety of SBO’s for humans, and efficacy has been demonstrated in dozens of peer-reviewed published studies.

Once in the intestines, SBO’s leave the spore form and act the same as any probiotic. Competitive inhibition helps the beneficial probiotic bacteria proliferate and crowd out the harmful bacteria. Each strain in CoreBiotic® is identified by genomic sequencing for specificity so that you know you are getting the same product every time. Only strain-specific probiotics have undergone rigorous genomic studies, guaranteeing accurate strain specificity, potency, and safety.

Manufactured without milk, eggs, fish, crustacean shellfish, peanuts, wheat, soy and gluten. Produced in a facility that may process other ingredients containing these allergens.

Take 2 capsules once daily or use as directed by your healthcare professional.

If pregnant or nursing, consult your health care professional before use.